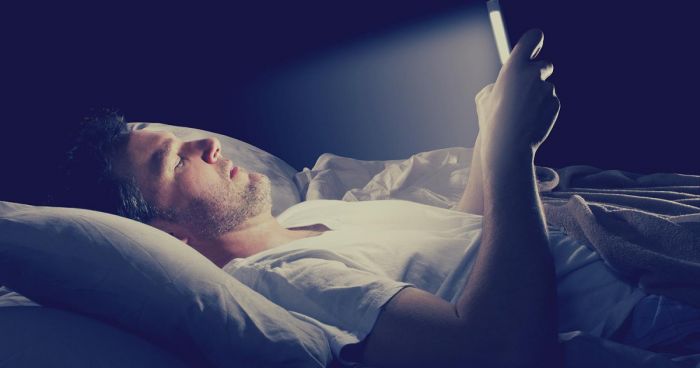 The brain is electric in nature. Throughout the day, we experience different brain states. These states are based on the electrical frequencies our brains are functioning in and are known as Alpha, Beta, Theta and Delta.

Brainwaves are measured in Hertz, just as electrical frequencies are.

Cell Phones emit a type of electromagnetic frequency known as Radio Frequency Radiation. A 2005 study published in Neuro Report has found that exposure to RF Radiation 30 minutes prior to sleep affects the cycles the brain goes through during slumber.

One of the main cycles during sleep is called the Rapid Eye Movement phase, also known as REM. REM is a crucial component of healthy sleep. It is within REM that dreams occur.

The study found that exposing subjects to cell phone radiation by having them hold an active cell phone up to their ears resulted in a change in the subject's REM phase of sleep.

Although the subjects exposed to RF radiation still experienced REM sleep, the REM period of sleep came on much faster. In scientific terms. RF Radiation from cell phones caused "a decrease in REM latency".

"...a reduction in REM sleep onset has often been seen in unmedicated depressed patients and also other psychopathological conditions."

The study concluded that the decrease in REM latency after exposure to cell phone radiation was possibly due to the innervation of a specific set of neurons whose function it is to regulate brain states.

Try to move out of the bedroom any technology that is not necessary. The technology that must stay should be spot-cleared using the appropriate Crystal Catalyst Resonator.

Try to avoid using a cell phone for at least one hour before bed.

Shut off WiFi at night.

Try to keep the cell phone out of the bedroom at night. Keeping an active cell phone on a nightstand will expose the body to RF Radiation throughout the night, as cell phones are always searching for a signal if on.

If possible, shut off the electricity to the bedroom at night by switching off the circuit.