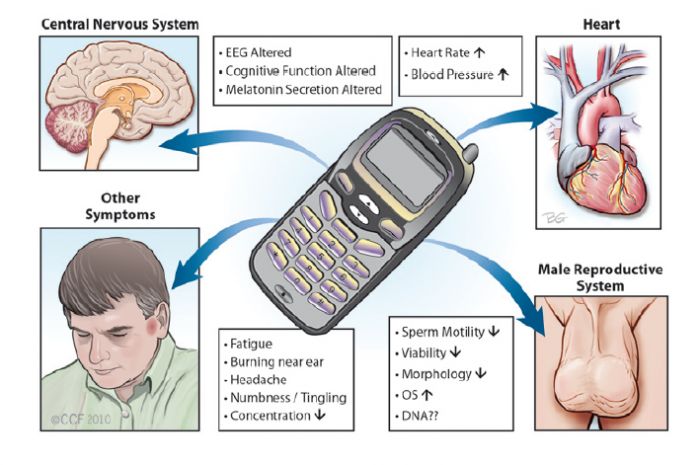 A study published in the June 2003 Journal of Environmental Health Perspectives has found that the electromagnetic radiation emitted from cell phones causes neurological damage.

The study was conducted by the Department of Neurosurgery at the Lund University Hospital in Lund, Sweden. Two controls of rats were exposed to radiation mimicking that of the average cell phone. The rats used were all of a certain age that corresponds to the age of teenager in humans.

The rats that were exposed to the radiation developed leakage in the blood-brain barrier as well as the death of neurons in different areas of the brain. The areas of the brain that experienced nerve cell death were the hippocampus, the cortex and the basal ganglia.

Researchers who set-up the study had already completed a study that showed leakage happening in the blood-brain barrier of mice after two hours of cell phone radiation. This new study set-up was to confirm whether or not this leakage led to nerve cell death in the brain. Their findings were positive.

"We chose 12-26 week old rats because they are comparable to human teenagers- notably frequent users of mobile phones- with respect to age. The situation of the growing brain might deserve special concern from society because biological and maturational processes are particularly vulnerable during the growth process."

"The intense use of mobile phones by youngsters is a serious consideration. A neuronal damage of the kind described here may not have immediate demonstrable consequences, even if repeated. In the long run, however, it may result in reduced brain capacity that might unveiled by other later neuronal disease or ever the wear and tear of aging. We cannot exclude that after some decades of (often) daily use, a whole generation of users may suffer negative effects, perhaps as early as in middle age."