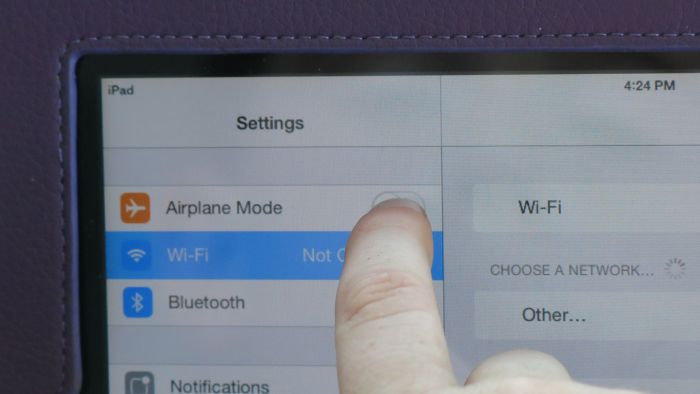 When Is a Wireless Device Really Off?
As an article in USA Today about cell phones points out, "The worst part is that even if you turned the phone off to be safe, it wouldn't really be off." Although the article is referring to the use of cell phones for spying and collecting data, the same is true of the cell phone when it comes to EMFs.

All WTDs devices continuously check in with their main network to be sure a connection exists. The signal that is sent out as the WTD 'tests' its connection is called the digital handshake. The digital handshake happens at regular intervals, and in the case of cell phones it could be happening several hundred times per second, even when your phone is not in use.
Turn Off Antennas
Airplane Mode is also called Flight Mode. It is a setting on your wireless device that will turn off antennas.

There can be more than one type of antenna on a WTD. On some WTDs, Airplane Mode only turns off Cell Antennas, not Wi-Fi and Bluetooth antennas. We recommend taking the time to look into how to turn off the additional antennas on your WTD.

If handing a WTD to a child, it is recommended to first turn on Airplane Mode and turn off Wi-Fi and Bluetooth.
Avoid The Lap
As is written in the manuals in the small print, WTDs are not to be placed on a lap. This is because WTDs do not pass FCC radiation safety limits when placed directly on the body, so it is technically illegal for them to be used in this manner. This is why the manufacturers are required to write the "no lap clause" in their manuals.  WTDs should always be placed on a table or other surface rather than a lap.

Holding the cell phone up to the ear for calls is never recommended, as it puts your brain in direct line with the radiation. As distance is key with radiation, the use of speaker phone is the best option for calls.

According to many experts, powered on cell phones should never be carried in a pocket or on the body.
(There has been an increase in rectal cancers among younger people over the past several years, leading some EMF researchers to speculate that the habit of carrying the cell phone in the back pocket is leading to the increase in this type of cancer.)

To lessen the amount of radiation you are exposed to from your cell phone, we recommend turning automatic updates off and reducing active Apps. When sending a text, hold the phone away from the body when you press send to reduce radiation exposure.