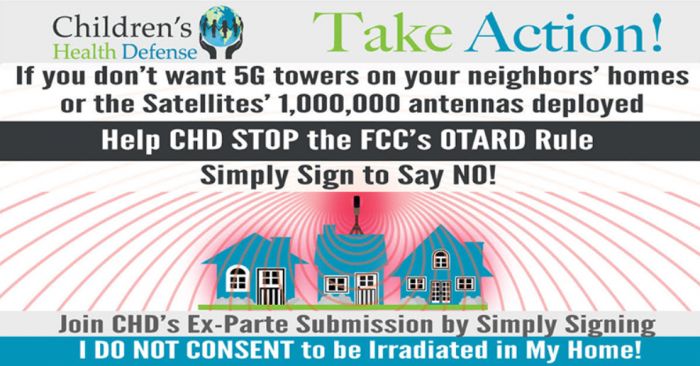 While many prominent voices in the sciences have been calling for the halt of the roll-out of 5G, a new ruling by the Federal Communications Commission (FCC) will fast-track the deployment of 5G Antennas onto private homes.

The Fifth Generation, known as 5G, utilizes a never before commercially licensed frequency that allows for the transport of large amounts of data. However, a caveat with 5G, is that the frequencies are unable to travel long distances, therefore its implementation requires the installation of millions of 5G Antennas. In order to just set up the basic foundational structure for the 5G network, one million Antennas are needed.

5G first caught the attention of scientists due to the high millimeter wave radiation the network uses. These millimeter waves (MMW) have never been licensed before for use for the public. In addition, the type of radiation they emit has been used as an EMF Weapon by the US and Chinese Military. Called the Active Denial System, the same frequencies that make-up 5G are beamed at crowds to disperse them, as the radiation causes an extreme burning sensation when it hits the skin.

In essence, 5G is an experimental network that, according to thousands of medical doctors, researchers, professors and scientists worldwide, will disrupt the health of the human race along with the balance of the world's eco-system - as birds, bees and insects are adversely affected by 5G.

The FCC, however, continues to ignore any of the potential health risks associated with 5G and has recently expanded its "Over The Air Reception Devices (OTARD) rule to allow the Telecom Industry to install 5G Antennas on residential homes - without any oversight. No permits will be needed and the wireless companies will simply go into a private contract with homeowners.

Homeowners will be compensated for allowing the installation of 5G Antennas on their roofs.

Unfortunately, these rooftop Antennas will increase the amount of radiation exposure both the homeowner and their neighbors will be receiving. However, under this new ruling, the approval of neighbors is not necessary for a homeowner to seek.

To date, non-5G rooftop cellular antennas have been found in studies to increase cancer rates drastically for those living beneath them in homes or apartments, as well as for those living in close proximity to them - such as neighbors.

According to the non-profit Children's Health Defense (CHD), "The OTARD rule expansion will allow a “Wireless Wild West” for 5G infrastructure and antenna deployment which will include the 1,000,000 antennas to provide the ground infrastructure for the [5G] satellites."

The CHD states that, with this new 5G ruling, the FCC is forcing Americans to be 'irradiated" in their homes.