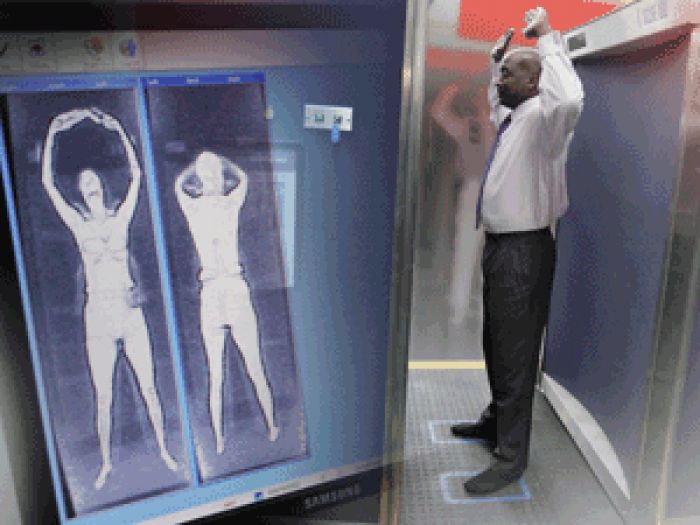 There have been two types of Scanners used at the Airports. The full body radiation Scanners and the Backscatter X Ray Scanners. When first installed, many Doctors expressed concern over their safety.

The decision has been made to replace these original Scanners with a new System. The new System of Scanners utilizes millimeter wave technology, which is the same type of technology used for 5G as well as for the Active Defense Military System.

These new Systems have not been proven to be safe.

Safety is Not Assured

As the safety of the Airport Scanners, both the old Systems and the new System, was never determined through any type of short or long term testing, the Electronic Privacy Information Center (EPIC) sought the release of documents via the Freedom of Information Act (FOIA) that concerned the levels of radiation emitted by the Scanners.

The documents revealed that there was a study done by John Hopkins that showed the radiation levels around the Scanners exceeded the "General Public Dose Limit" set by the government. The documents also revealed that federal agencies "mischaracterized" the National Institute of Standards and Technology findings in regards to the radiation emissions and their effect on the health of the body.

The FDA put forth a statement that the radiation levels of the Scanners fell within current Safety Levels. In response to the FDA's statement, several Doctors wrote a letter pointing out that the Airport Scanners had not been independently tested.

“The problem remains that the safety of the X-ray airport scanners has not been independently verified. The tests were performed by the manufacturer using the manufacturer’s questionable test procedures… The independent testing of the safety of these specific scanners has not been rigorous nor has it been held to the standards usually associated with new devices”.

The Doctors also pointed out:

…It is still unclear how much damage to cells occur with low dose x-rays...potential x-ray damage, primarily to skin cells and adjacent tissues, would lead to a ‘damage response’ by the cells.

EPA's Solution: Choose a Pat Down

Rather than take the concern of the medical professionals seriously and re-test and re-evaluate the Airport Scanners to see if radiation levels of both the old Systems and the new Millimeter Wave System do indeed exceed current Safety Levels, the EPA has instructed those who are concerned about radiation exposure to opt out of being Scanned and choose a Pat Down.