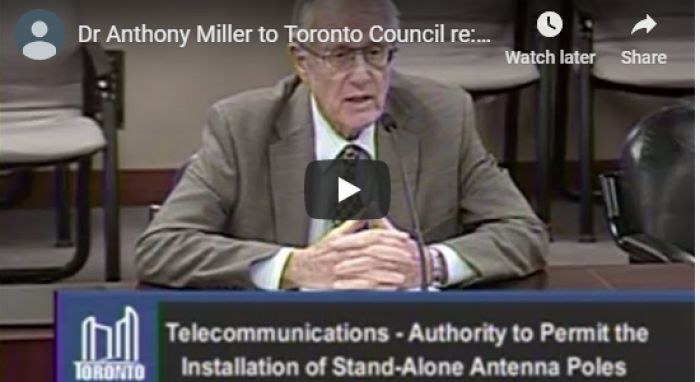 The Telecommunications Act was signed into law in 1996. As the Wireless Industry played a large role in the crafting of this Act, there is a Section (Section 704) that, according to Watchdog EMF Group The Environmental Health Trust, "preempts state and local government regulation for the placement, construction, and modification of personal wireless service facilities on the basis of the environmental effects."  This Act, specifically Section 704 of this Act,  has allowed the unregulated installation of hundreds of thousands of cell towers and antennas to date in the USA.


Although there have been hundreds of thousands of towers and antennas erected since 1996, chances are many of them you will never see. While many cell towers are built in full view, just as many cell towers and antennas are hidden. Cell towers are often disguised as trees so as to make them blend in better with their surroundings. Cell antennas are often hidden in signs, billboards and in chimneys, as well as placed on the roofs of buildings and can be difficult to spot.

Cell Tower Radiation vs Cell Phone Radiation
While both cell towers and cell antennas emit radio frequency (RF) radiation, cell phones tend to concentrate the radiation towards a specific part of the body. If the phone is being held to the ear, that radiation will be concentrated towards the brain. If the phone is being carried in a pocket, that radiation will be concentrated at the spot on the body where the pocket is. Cell tower radiation is different than cell phone radiation. It is not as concentrated as cell phone radiation, as the emissions are at lower levels. However, the exposure with cell tower radiation is a full body exposure that never turns off. So, if you are living with a cell tower or antenna close to your home, the exposure to radiation you are receiving from that tower or antenna is 24/7, all day and all night.

Highest Exposure Levels
Countless peer reviewed studies have found harmful health effects associated with exposure to cell phone radiation. These studies show that people living close to cell towers and/or antennas receive the highest level of exposure.According to the Environmental Health Trust, it has been found that people sleeping in homes with windows facing antennas will experience higher levels of exposure during the night. While a cell phone can be turned off during sleep, and should be, it is not possible to stop the RF emissions from cell towers and antennas. Those emissions continue throughout the entire day and the entire night. As studies have shown that there is a higher density of radiation in close proximity to cell towers/antennas, many local governments have begun restricting the placement of cell towers and antennas near schools and residential communtities.

Electrical Workers Not Protected
The International Brotherhood of Electrical Workers (IBOEW) wrote the FCC in 2013 and stated that “existing FCC RF human exposure limits by the FCC licensee is not effective and cannot/is not being enforced” . Workers on site for cell tower and antenna repair, as well as those working in close vicinity to these towers and antennas, began suffering injuries from the high levels of radiation they were exposed to. “When there is a hazard, the hazard creator has a duty to warn others against the hazard" states the IBOEW. Unfortunately, it seems the FCC has turned a blind eye to the wireless industry and has allowed the industry to operate its cell towers and antennas without any enforcement of compliance to existing FCC radiation safety levels.