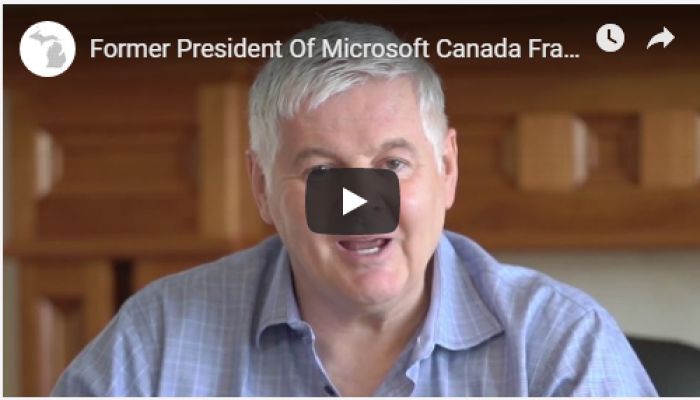 The Former President of Microsoft Canada, Frank Clegg, has come out against the use of wireless devices.After serving as President for one of the largest Telecom Companies in the world, Microsoft, Mr. Clegg had dedicated the last five years of his life to researching the effects of wireless radiation on health. He is now working to educate the public on the health hazards associated with the use of wireless technologies, as well as the health dangers associated with the forthcoming 5G Network,

Wireless Devices Untested
In an educational video posted on September 16th of 2019, Mr. Clegg breaks down his experience as an insider in the Telecom Industry as well as his findings on the health hazards associated with exposure to wireless radiation, including 5G.

Mr. Clegg begins by explaining to the public that the Telecom industry uses their influences in Washington to get their wireless products into the marketplace as quickly as possible. This means bypassing any testing to prove these devices are indeed safe for the public to use. No wireless devices have ever been tested by the FCC before being released into the marketplace, starting with the cell phone.
The Telecom Industry 'Self-Polices'
According to Mr. Clegg, the Telecom Industry policies itself. The Federal Communications Commission (FCC) is the government agency that is supposed to regulate the Telecom Industry. However, the Telecom Industry has placed their people inside of the FCC, making it so the tail is wagging the dog. In addition, Mr. Clegg points out that the FCC does not have one scientist, researcher or doctor on their payroll. The agency is made up of ex-Telecom Industry heads and attorneys, so those who would have the knowledge to understand the biological and health ramifications of these new technologies are absent. This could be why Italy, Switzerland, Russia and China have wireless radiation safety levels that are much more stringent than those in the United States. Mr. Clegg states that the US allows over 100 times more radiation exposure for their citizens than these other countries.
The Telecommunications Act of 1996
The Telecommunications Act of 1996 was the Act that allowed the widespread implementation of cell towers.In addition, according to Mr. Clegg, this was the Act that the Telecom Industry used to protect themselves from any future liabilities associated with health problems from the wireless devices they were getting ready to release to the public on a widescale.
Studies Show Wireless Harmful
While Mr. Clegg makes it very clear that there are no studies to date proving wireless radiation is safe, there are in fact many studies that have been done showing that wireless radiation is not safe. He points out that known health ramifications from wireless radiation exposure based on these studies are headaches, fatigue, insomnia, depression, anxiety, ADD, irregular heart beats, tinnitus, numbness of extremities, permanent DNA damage and cancer.
5G Waves Used As EMF Weapon
Mr. Clegg is also very concerned about the forthcoming 5G Network. His research into the new Network, which will feature millimeter wavelength radiation, has shown that these wavelengths have never been tested for public use but have been used by the US and Israeli MIliltary for crowd control. These millimeter waves are currently used as part of the Active Denial Weapons System, as they create a painful, burning sensation on the skin which aids in dispersing crowds, as the people hit with the waves run to get away from the burning sensation.

He also goes onto say that 5G will eventually affect everyone, as the planned roll-out will place a 5G antenna every 500 feet in both urban and rural communities.
A Proponent of Safe Tech
Having spent his life working in the Telecom Industry, Mr. Clegg is a proponent of technology and of all the ways it has and can continue to improve our lives. He feels there is a way to 'have our Tech and eat it, too' and has joined together with hundreds of scientists, experts and medical professionals from around the world who are looking for safer alternatives to the use of wireless devices.

Mr. Clegg is co-founder of the Canadians for Safe Technology and has recently joined the Board of Advisors for the US based non-profit EMF Watchdog Group The Environmental Health Trust.