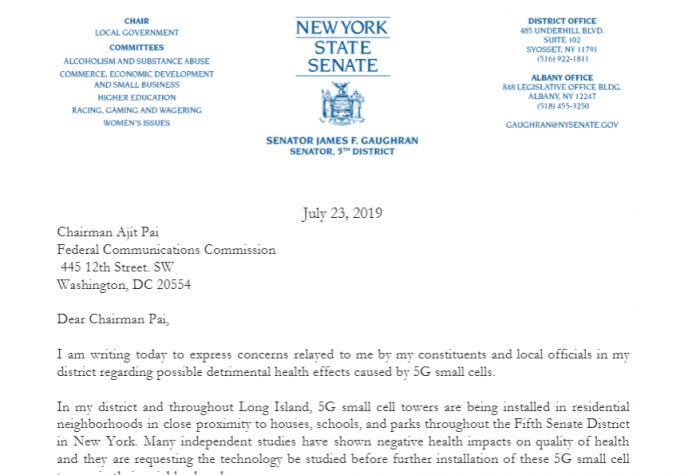 Health of Constituents Priority
On July 23, 2019 New York State Senator James F. Gaughran wrote a letter to the FCC requesting the removal of all 5G small cells that had been installed in his district in Long Island until studies could be done that prove they are indeed safe. He said in the letter that his constituents were urging him to take action on their behalf as they were very concerned for their health.

"In my district and throughout Long Island, 5G small cell towers are being installed in residential neighborhoods in close proximity to houses, schools, and parks throughout the Fifth Senate District in New York. Many independent studies have shown negative health impacts on quality of health and they are requesting the technology be studied before further installation of these 5G small cell towers in their neighborhoods."
Concerns Over 2G, 3G, 4G & 5G
While much of the focus concerning detrimental health effects from radiation exposure has been on the new 5G Network, those in the know are also turning an eye to the current 2G, 3G and 4G Networks. These Networks utilize a different type of radiation than 5G, but independent studies on this type of radiation also show detrimental health effects.

"My constituents are concerned that until they can be sure that living in close proximity to cell antennas will not cause adverse health effects, we would like to see these “small cells” shut down and removed from our neighborhoods."

"We are also concerned with the long-term 24/7 exposure to 2G, 3G, and 4G that are currently in our neighborhoods. They are especially concerned with the more vulnerable populations such as children, fetus in the womb, and the immune compromised.
Requests Study on Cancer Clusters
The purpose of Senator Gaughran's letter to the FCC was to request the FCC conduct a thorough study on the health effects from radiation exposure from both 4G and 5G. This, he said, was the will of his constituents.

"Iam reiterating their requests for a study on the health impacts of 4G and 5G small cell towers and any potential association with cancer clusters. The health of our community is of the utmost concern and cannot be sacrificed. I encourage the Federal Communications Commission to expedite such a study, as this is a critically important issue for my constituents and our community, and provide my office with all relevant information used by the Federal Communications Commission to make 4G and 5G small cell tower safety determinations."
Senator Gaughran is asking for the FCC to take practical measures to protect the people by testing these Networks, including the new 5G Network that is in the process of being rolled out.. It is important to remember that cell phones were also greenlighted for the public without prior testing.