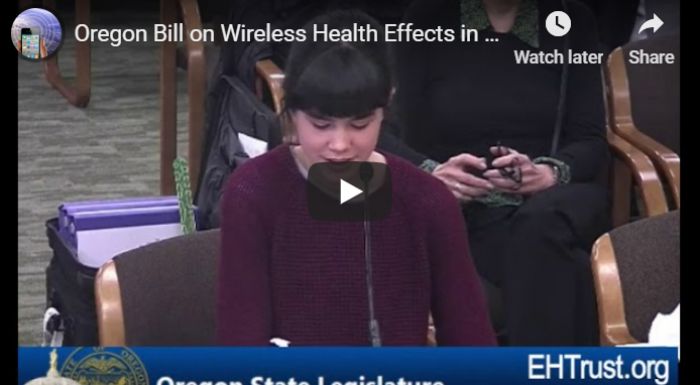 First In The Nation: Oregon Senate Passes School Wireless Safety Bill
Oregon's state Senate passed a Bill in June of this year that will direct the Oregon Health Authority to "review independently funded scientific studies of the health effects of exposure to microwave radiation, particularly exposure that results from use of wireless network technologies in schools."

The Bill, known as SB 283,  "also directs the Oregon Department of Education to develop recommendations to schools in this state for practices and alternative technologies that reduce students’ exposure to microwave radiation that Oregon Health Authority report identifies as harmful."
According to Advocate for Wireless Safety David Morrison, "the bill is expected to also pass in the House, following compelling testimony from the Chair of the Health Committee, Sen. Laurie Monnes-Anderson."

The issue of wireless safety in schools, according to David Morrison, is now being taken more seriously due to the increasing reports coming to light of increased cases of cancers in schools that have cell towers placed near them. The cases are known as "cancer clusters" and usually point to an environmental carcinogen as the cause. With microwave radiation being labeled as a Type 2 Carcinogen by the World Health Organization, it is easy to see why Oregon's Senate passed the Bill and declared "an emergency" around the use of wireless technology in schools.

PortlandPublic Schools Sued
A precedent for Oregon being first in the nation to introduce this type of Wireless School Safety Bill could have to do with the Portland Public School System being sued in July of 2011 by a parent of a child for "involuntarily exposing the child to microwave radiation" via powerful wifi routers in the school.

The Bill has declared the current situation of wireless microwave radiation in the schools to be "an emergency". as it is viewed as a topic that is necessary to immediately visit for the "preservation of the public peace, health and safety."

Wireless Safety Advocate David Morrison, who worked for years to help bring this Bill to light and was instrumental in its passing the state Senate,  wonders how Oregon is going to handle the imminent threat of 5G as people become more educated on the adverse effects of EMF radiation.
Source: