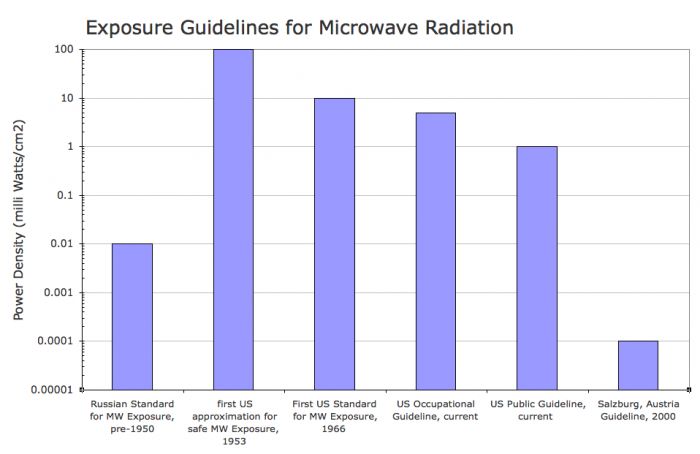 The US Standard for Safe Levels of Microwave Radiation was set in 1966...and has not been updated since.

The origins of the Safety Levels are revealing, as they were not made to protect the individual from exposure, but rather set to allow the military to function without hindrance.

Coming out of WW II,  the focus at the time was being able to set Safety Levels of radiation high enough to allow for the use of radar and other radiation-dependent technologies by the military.

"The decision makers were preoccupied with winning a major war, and then, during the first Cold War, with erecting a strong defense.  They were not primarily concerned with public health or environmental monitoring. The decisions concerning technology were made in the context of global or national security rather than that of individual welfare."

In the end, the US Military prevailed, needing Levels high enough to be able to expose their own personnel to radar without liability.
"The persons who drew up and accepted the 10 mW/cm2standard did not believe that this level of exposure was likely to cause any serious consequences in the foreseeable future...that does not dictate that it was the best standard or that it was valid."

Since that time, much evidence has been collected showing that levels of radiation too low to heat tissue still have damaging effects.

Much research had already been conducted on microwave radiation prior to the establishment of the 1966 Safety Levels. These early studies were supposedly taken into consideration when setting the levels for 'safe' exposure.
1926-39:  effects of ultrashort wave radiation on malignant tumors in mice

1930: changes in blood counts at 13 mW/cm2
1932: attenuation of bacterial toxins
1932: brain responses at 12 to 74 mW/c:2
1943: a statistically significant increase in the concentration of immature red blood cellsin exposed workers and a high incidence of headaches
1948: research at the Mayo Clinic reported cataract formation in dogs
1948: research at the University of Iowa showed cataracts and testicular degeneration in dogs

Conclusions Drawn
Based on the studies listed above, the Military concluded in 1966 that the effects of radiation exposure were thermal and non-cumulative and proposed their Safety Level accordingly.

In 2018, the non-thermal and cumulative effects of radiation exposure have been studied and are well documented.

To support the Safe Level setting that was put forth by them, the Military concluded that, in regards to radiation, "man has a built-in alarm system, coupled with his threshold of pain that protects him from thermal injury”.

More in this category: « Is Cell Tower Radiation Drying You Out? The 5G Network »